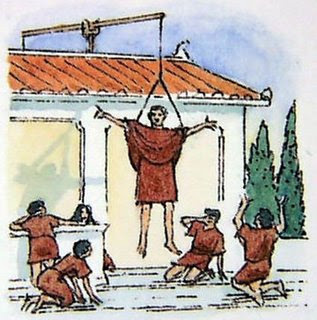 Good craft in writing necessitates writing complete and compelling stories. Shortcuts are far too easy to take, and often seem like the only way to complete one’s story, but they are the antithesis of good craft. One such shortcut is called the Deus Ex Machina
Literally translated, Deus Ex Machina means “God from the Machine”. It comes from Shakespearean times, when actors representing gods would be lowered mechanically on to a stage to solve a plot problem that otherwise could not have been solved.
I prefer to think of it as meaning “The hand of God” – that God literally comes down and influences the plot. In either case it’s the same thing – an artificial mechanism to move the plot – the hand of God coming down to save or kill your characters.
In our desire to create powerful stories, we are constantly getting our characters into very, very serious and complex problems. The hope is that the characters resolve these issues themselves. Sometimes we write them into something so difficult that we as writers can think of no way for them to get out, so we use a Deus Ex Machina, we use our own hand, the hand of god (for as a writer, you are literally the god of the world you create), to bail them out. They escape, not through a point of plot or character, but an obscure, random, 1 in a million chance that we grant them.
A recent example of this is Stephen Spielberg’s “War of the Worlds”. In it, Earth is attacked by aliens. They are so vastly superior that there appears to be (and really is) no way for human beings to win. But at the last moment a virus pops up and kills off all the aliens. Human beings win, not through their ingenuity, persistence, intelligence or skill, but, for all intents and purposes, an act of god. None of the major characters had anything to do with the victory, in fact nothing in the plot contributed to the victory, it simply happened. One day we were getting wiped out, the next day a virus kills them all and human beings “win”. It is the quintessential Deus Ex Machina, and a prime example of why many people felt robbed by the ending of the film.

One of the greatest examples of Deus Ex Machina is the old Batman television series of the 70’s, who’s consistent use of Deus Ex Machina became a running gag. When tied to a buoy about to bee eaten by sharks, Batman produces a can of shark repellent which just happened to be in his utility belt. Torpedo polarity reversers, radar jammers, anti-hypnosis buzzers, spider web solvent, and portable flotation devices were all on his utility belt at the exact moment he needed them. It is through no plot event that he carries these things on him, they just all happen to be there when he needs them, as if God supplies that utility belt with an endless supply of those things that he will need on any given day

Deus Ex Machina does not apply solely to endings. When working with one of my students, she found that she needed a character killed. There was no easy plot way of doing this (nobody had need or desire to kill him, and he wasn’t put in any dangerous situations), so she simple wrote that he crossed the street and was struck by a car. He died, and the story could move on in the direction she wanted. This created a sense of the author intruding into the story. Readers felt like he died, not as a natural part of the story, but because the author needed him to. While as authors we all have needs, the reader should never feel those needs – should never feel like she is being directed, but rather that the story is evolving of its own volition. Our readers are supposed to see the tricks, not the mirrors.

Deus Ex Machina almost always creates a tripping point, a point where the reader is pulled out of the story, out of their suspension of disbelief. It can also leave them with the sense of being robbed of a story.

A Deus Ex Machina is an easy tool to use, and that is why it is used so often. In our desire to finish a project quickly, we often revert to it on some level or another. But we must keep an ever vigilant eye against it. It is usually poor writing and leaves readers unsatisfied, and as it should. If the writer has not taken the time to find an effective means of solving the situation believably, why should the reader vest their hearts into the story? If you, the author, are willing to write fantastical solutions to their problems, why should they ever believe the characters are ever in jeopardy? Without a sense of jeopardy, why are we reading the story?