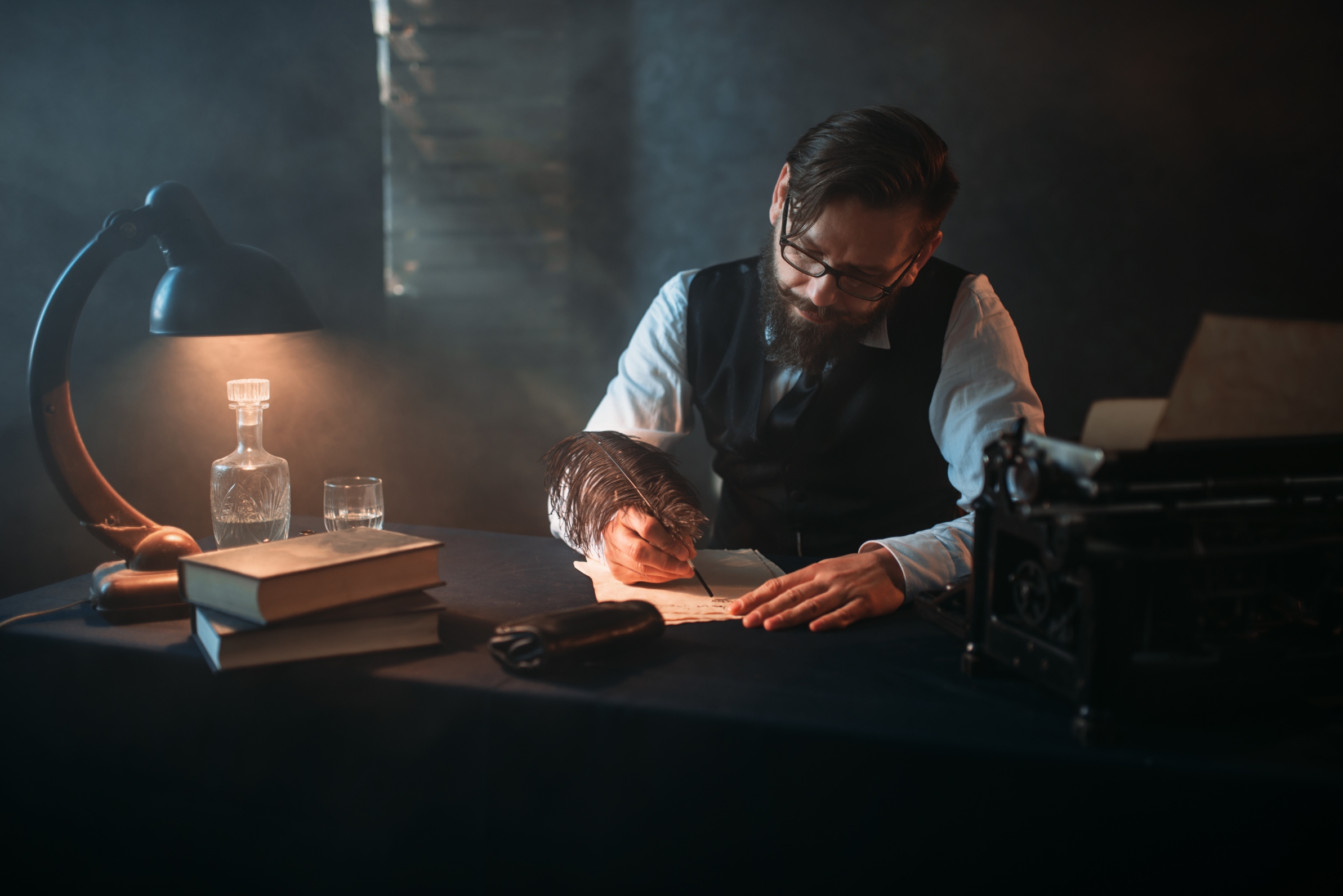 What is voice? A standard definition might be, “The cadence and style which gives an impression of a distinct perspective from which the narrative is told.” Or less messily, “That which makes you feel like a book is talking.” But that’s pretty vague. Catherine Hale, in her book Sin and Syntax, calls voice “The je ne sais quoi of spirited writing,” which is French for “fuck if I know.” And as a writer you need to know about voice. If someday you get the notion to publish, you’ll read the bios of literary agents you’d like to query. At the time of this writing, I can testify that they ask for one thing almost unanimously above all else: A voice that grabs them.

So what makes critics croon over one voice, and reject another as flat and dull? What is it about a book that invites you to curl up with it by the fire? Let me offer another definition of voice, my own concoction: “Voice is what you do wrong for the right reasons.”

To explain that idea, I’d like you to try a thought experiment. Imagine that God wrote a novel. What voice would He employ?

I submit that He’d strike utterly the vagaries and junk with which we mortals clutter our writing and speech. Gone would be cumbersome phrases like, “he was the sort of person who,” or, “on that very afternoon,” and stupid repetitions like, “’I’m sorry,’ she said dolefully.” His words would be frugal and meaning-filled, His sentences light-footed yet tympanic, each adjective and metaphor calculated to conjure the most vivid and congruent image in the reader’s mind. Think, perhaps, King James Bible, only without all that quirky “the quick and the dead” type stuff. He’d never ask a rhetorical question or swear out of nowhere in the first paragraph.

So the big (rhetorical) question is: would you read the book?

Maybe. But much though you may be fond of the old codger, I think you’d find His writing dull. This god-voice would be without quirk, without surprising turns of phrase, and without those bursts of excitement that bleed through good writing and let you know the writer is as rapt as you are. In short, it would lack the sense that a human being was writing it. We’re all in this to understand the human condition, so we tend to droop when we read robotic prose.

Now imagine you’ve studied all the greatest advice on the subjects of syntax and simile, and have practiced to the point that you can craft sentences that approximate this god-voice. I hope someday this happens. Then you can choose when to add imperfection back in for maximum impact. For maximum humanity.

Let’s look at an example of voice. The voiciest young adult novel I’ve ever read, Feed by M. T. Anderson, features a clever and chilling dystopian future. It also features my favorite opening line of all time:

“We went to the moon to have fun, but the moon turned out to completely suck.”

What a line. It snatches reader attention, largely because it’s absurd go to the moon and then let the experience bore you. I mean, the moon! And he doesn’t even care! I already want to slap this kid.

But on another level, the line is a mess. It’s doing everything wrong! In fact, let’s fix it. We’ll start with the first clause, “We went to the moon to have fun…” Look at those inspecific words! Micro-editing is an art, but any putz can see that “went” is a pathetic, weak verb conjuring up no image whatsoever. Did they teleport there? Take a space shuttle? Now that I think of it, “shuttled” offers us real imagery for only one extra syllable. And “to have fun?” In what way? Did they want to sled down the craters? Check out the discotheques? In reading the book it’s clearly the latter, so let’s add that in for the sake of imagery. “We shuttled to the moon to see the discotheques…”

Alright, second clause: “…but the moon turned out to completely suck.” How many unnecessary syllables are there? It’s a disgrace, and that’s not even counting the split infinitive (which I maintain is grammatically acceptable but should be avoided anyway because some people get uppity about it). I mean, there’s no excuse for saying “the moon” twice in one sentence, when “it” would work fine. And what does “suck” mean in this context? That it was boring? Disappointing? There’s got to be a better word.

So I give you my new, improved version of M. T. Anderson’s opener:

“We shuttled to the moon to see the discotheques, but they bored us.”

Using two fewer syllables than the original, I’ve managed to craft a more vivid and specific sentence. But I’ve also destroyed the voice.

Too many amateur writers, especially those aspiring to literary novelism, exercise this kind of precision without injecting any systematic voice into their writing. Their work is beautiful, evocative, and unfailingly dull.

So how does one design a voice? In many ways it’s little different from designing the speech patterns of a character. You decide beforehand what quirks are going to enter the narrative consistently, and then follow through (or, more often, you notice what quirks you’re already biased towards in your drafting, and decide to saturate them throughout). The narrative voice of this essay, for instance, relies on asides (often in parentheses), italics for emphasis, an abundance of the second person and deliberate jauntiness such as calling God an old codger. And while you may tire of these antics, I hope you’ll concede at least that they beat the hell out of your average textbook.

So voice must first and foremost be consistent. That’s one way you let readers know that you’re doing things wrong for the right reasons, rather than simply writing badly. Secondly, the cadence of a voice should mimic some form of actual talking. In fact, as an exercise you might imagine whom you’d like to read the audiobook. And yes, I know prose rarely sounds exactly like talking (it usually has too many flowery metaphors for one thing) but it should give an exaggerated impression of speech, like a cartoon animal giving a sense of the real thing.

My car was black, a sun-beaten black, an old Ford, the make that explodes into a fireball now and then. The car’s not big and strong, more runty and sputtering. It’s like driving a pregnant roller skate. The tape deck worked.

Those of us who have failed to impregnate a roller skate may be scratching our heads at that metaphor. Again this is bad writing. We don’t need to know that a car is black and sun-beaten black, and we don’t need to know that it’s not big and strong before discovering that it is runty and sputtering. Plus the narrator seems to suggest that his car might explode more than once.

But Woodrell commits throughout the book to this herky-jerky voice and its off-kilter metaphors, until soon you can really imagine the character. And we see his emotional investment and priorities when he throws out the fireball issue as a subordinate clause, while giving his tape deck a sentence of its own.

He likes his music.

As an example of what not to do, imagine an action scene in a thriller where your character bursts out of a hallway just ahead of her pursuers, and into a hotel lobby. You then take time to describe the lobby’s chandelier, its tasteful accent couches, and the frescoes on several walls. Readers will think, it’s life or death here! Who cares about the damned frescoes?

Instead mention one or two of those visuals in a short sentence, or better yet a clause, like the fireball thing. Then focus on the pumping heart, the gunshots, the fear. If your narrator seems to care about what she’s describing, so will we. We want to live vicariously through someone so caught up in a story that she may even trip over her words. It’s black, a sun-beaten black…

So voice is mistakes. It slows you down with extra syllables you don’t need. It wants you to be less vivid than you otherwise might be and even run the risk of confusing your reader with a neologism or unusual construction. You’ll have to balance it with clarity and pace (and the above examples are on the voice-heavy end of things). But voice is not optional. A novel is a communication, as personal and specific as an e-mail.