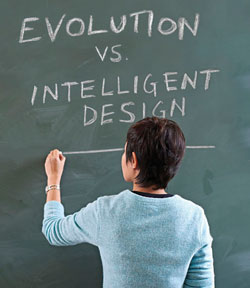 Why God Never Received Tenure at Any University:
By Ann Landers.
He had only one major publication.
It was in Hebrew.
It had no references.
It wasn’t published in a reference journal.
Some doubt He wrote it Himself.
He may have created the world, but what has he done since?
The scientific community can’t replicate his results.
He never got permission to use human subjects.
When one experiment went awry, He tried to cover it up by drowning the subjects.
He rarely came to class and just told students to “Read the Book.”
He had his son teach the class.
He expelled his first two students.
His office hours were irregular and sometimes held on a mountain top.
Although there were only 10 requirements, most students failed.

On Tuesday, August 2nd, President George W. Bush declared that Intelligent Design should be taught in science classes as a competing theory to evolution.

There is little problem with teaching the theory of Intelligent Design in a Humanities or Philosophy course. But any person arguing that intelligent design (or creationism for that matter) should be taught in a science class has a gross misunderstanding of what science is, how it functions, and the difference between science and religion.

The basic definition of science is quite simple: it is the systematic acquiring of knowledge using the “Scientific Method” – a framework governing what constitutes scientific knowledge and how it is acquired. The Scientific Method was first practiced by Galileo, who, coincidentally, was also the first to discover that religion did not always appreciate new discoveries.

Far from perfect, Science cannot prove anything. It can only determine facts to varying degrees of certainty, but not beyond all doubt (which is one reason why a court of law requires only proof beyond a “reasonable” doubt).

Science is also amoral. While there are standards of ethics within the scientific community, the process of science is independent of ethics. It is no harder or easier to make life saving insulin than it is to make deadly VX nerve gas. The ethical ramifications of a given scientific theory have no impact on its validity or accuracy. When Einstein objected to his work being used to create nuclear weapons, his objections weren’t on scientific grounds, but ethical ones.

Ethics (i.e. what constitutes good and moral behavior) is the primary purview of religion. Society, by definition, cannot exist without some system of ethics. For this reason, religion has played a large, if not integral, part in the shaping of nearly every society since the dawn of civilization, from the Greeks and Romans, to the United States (which, despite an “official” separation of church and state, is still greatly influenced by religion).

Religious knowledge is based, not on the Scientific Method, but on faith. Knowledge is gained by reviewing and re-interpreting existing religious texts. The validity of these texts is a matter of faith, as is the existence of, and connection of the ordained to, God.

Faith can only exist in the absence of proof. If there were proof, you wouldn’t need or have faith. Were God to announce his existence to the world on CNN, faith in his existence would be non-sequiter.

Both systems, religion and Science, serve critically important functions to both the society and the individual. Neither system plays or works well with the other.

Intelligent Design cannot be taught in science class is because, even if it’s true (and it may well be), the truth of it can not be determined by applying the Scientific Method. This makes the theory unscientific by definition.

Because science cannot prove anything, being able to disprove becomes extremely important. One of the requirements of the Scientific Method is that one can imagine the conditions under which a theory would be disproved. A scientific theory becomes scientific law only after all reasonable efforts to disprove the theory have failed.

But what, exactly, are the conditions required to disprove Intelligent Design? Or to disprove God, for that matter? The theory that “God exists” can only be scientific if one attaches to it conditions under which it could be disproved. About the only way to disprove the existence of God would be if God came down here Himself and claimed that He does not exist… and that would pose its own set of logical conundrums.

It isn’t fair to exclude a theory because it’s different. But Science has no part in fairness or ethics. Science does not include or exclude by preference or morality, but by the application of the Scientific Method, nothing more or less. That framework is as incompatible with faith, as faith is with proof. Period.

Given both that Intelligent Design may be true, and that it can not fit within the framework of Science, we have a problem. This means that Science, which, at it’s core, is the search for knowledge, can not cope with a theory which may be true. Does this mean that the Scientific Method is imperfect?

Absolutely! That is one of the reasons why every few years, new knowledge comes up which requires us to reconsider old Scientific knowledge.

However, all disciplines are imperfect- Science, Mathematics, Art, Grammar, and History. All have exceptions which can not be applied to the discipline within its framework. If we decided to invalidate a discipline based on these imperfections, no disciplines would exist. We as humans use a limited perspective and a limited mind to try to understand an infinitely large universe. No framework we invent can possibly work perfectly under all conditions.

Despite its imperfections (and there are many) the Scientific Method has met with phenomenal success. It discovered antibiotics, pasteurization, and sterilization (which helped reduce the infant mortality rate from 30% in the 19th century, to 0.7% in 2002). It discovered insulin, a substance which saves 18 Million lives in the US alone. It made products like steel and electricity, products which make our homes safer, keep us cool in summer and warm in winter, and helps us wash our cloths. Practical application of the Scientific Method is why the average life expectancy is 81 years, more than twice what it has been at any time in history. The Scientific Method put a man on the moon.