Published May 16, 2006 by Nicholas Lamar Soutter

“How do I know what I want to say until I read what I write?”
Wright Morris

There are fewer concepts more misunderstood by the novice writer than that of a draft.

Ironically, there are few concepts in writing which experts and professionals agree on more consistently. They all say you need 3-6 drafts.

When I first began writing, the thought of 3-6 drafts seemed an insane amount of work. I figured “I’m reasonably bright; I should be able to knock it out in one draft if I REALLY try.”

90% of those who attempt a novel never complete it. This attitude is predominantly the reason why.

My first novel was Killdroid Rising, a sci-fi piece about man’s first encounter with aliens. In chapter 3, I killed off one of the main characters. On chapter 8 I found an even better place to kill him. So I went back, rewrote chapters 3-7 to spare his life till chapter 8, where he would get the ax. Then on chapter 12 I realized that if I went back to chapter three and killed him there, it would make chapter 12 much better (maybe give my characters a revenge motive).

SO, I needed to rewrite chapters 3-11 (the second time for 3-7, reverting them back to the original form which I hadn’t saved). Two thirds of the way through this process I realized I had taken out a lot of great stuff by killing him in chapter three.

It’s at that point that most people put down the book and quit.

I couldn’t finish the book because I was trying to do too much. I had a rough idea of the story, but I was still fleshing out details as I wrote. I was trying to improve the story, while exploring new ideas, while trying to write well, while adding a finished polish, all at once.

So I decided to just try a draft. I made myself a promise, a promise every writer should make to themselves. I promised I would NEVER show anybody the first draft of anything I write. No exception (not even for my wife).

It was a phenomenally liberating experience. I had been so concerned with having a finished product, something to show people so that I could say “See, here! I’m a writer!” that I was ignoring the basics of how to get it done. I was making my life 10x harder than it needed to be.

So, I wrote a first draft, and for it, I did everything I wanted.

I killed this poor character three times (chapter’s 3, 8, and 14). Each time, in the next scene, there he’d be, not a scratch on him. No explanation, nothing. All my characters would talk to him as if they hadn’t just seen him fall into a lava pit and get eaten by 10 lizards. Further, I didn’t solve a single problem I came across in this draft. If I didn’t have a name for a new character, I just called him “X001” or “X002” and so on. Don’t have a cool name for a new planet? Call it “Frappuccino” and move on. I didn’t stop for anything, just kept throwing everything I could into this book. I stopped trying to write well, stopped trying to show off my skills, to prove to readers and myself that I was a writer, and just tried to finish, to include EVERYTHING I wanted. I had two different first chapters, six endings, and one character who had five different names and three different genders.

I finished. Once I was done I had a completed story.

Why I couldn’t finish previously became abundantly clear; every time I got an idea, I would spend more time re-writing than moving forward. You can’t write 300 pages without getting loads of ideas, so every few chapters I had to go back and start over. By NOT drafting, I was actually increasing my workload, and coming out with a worse product to boot.

Drafting is simply a division of labor. A first draft should never even be an attempt to write well. It’s simply to see what it is that you have to work with. Your first draft is for addition, not subtraction. Throw in every idea, as it comes to you. Don’t go back, and remove ANYTHING, even if it makes no sense with what you’re writing. Ignore language, grammar, everything. Just make sure YOU can read it, that’s all.

We have two modes we use in writing… The first is the creative mode (the giving birth, the expression of your ideas). The second is the problem solving mode, fixing the problems in your work.

The trouble is that it’s very easy to go from “Creative” mode to “Problem Solving” mode. IT IS NOT easy to go the other way though. Once in problem solving mode it can take 15 minutes, a few hours, or even days to switch back. So if, on your first draft, you say “Hey, that sentence is poorly worded… How can I fix it”, you’ve just killed your creative process. Don’t fix it. Let it go, you’ll fix it later when you’re in Problem Solving Mode. Right now, you’re just fleshing out your ideas. You’re just trying to finish it.

Once that’s done, you have your story. It’s probably nutty, but all your ideas are on paper, and you can see what you have to work with. You can see what killing a character in chapter 3 will do to the whole book because the whole book (and then some) is written. You don’t have to guess what future chapters will look like, they’re already there.

Now is the time to make choices. Writing is about making choices… You now have EVERYTHING you want in your story, but your story doesn’t make sense. Figure out what works best for you, and make the choices that help you get to that goal.

For Kildroid Rising, I made a startling discovery. This character who caused most of my problems not only should never be killed, he shouldn’t have existed. I had (unknowingly) put him in for one reason, to kill him off. I had, in none of the writing, given him anything important to do. Everything he did could have been done by someone else. The problem with that? It makes his death meaningless. It’s poor writing, plain and simple. This is a trick poor writers do to convince you to get involved in the plot… They kill the cop’s partner 3 days before retirement to give the cop a reason to go after the bad guy, because it’s easier to do that than to come up with something creative.

The guy existed only to be killed, and my readers could see through that. Readers don’t like paper cutouts, and that’s what I had. It stung, but I removed the character completely. And my work became stronger for it, and I had stopped patronizing my readers (for the moment).

After your first draft, you do the second, which can be a lot of fun. Write an outline, using your first draft, of what your second should look like. Anything which interferes with you telling the story you’re trying to tell, get rid of it.
The second draft is for you to really get your story down. It’s to take the brainstorming of the first draft, and trim away the excess pieces. Michelangelo said that “David” always had existed inside the stone, that all he had to do was to trim the excess pieces.

This is a bit more than a trim. It’s a rewrite. You shouldn’t cut and paste pieces from your first draft, you should instead, chapter by chapter, write a new piece, based on the first, which is coherent and internally consistent. You should also try your best to make it readable by third parties. This will be the “first draft” you should be willing to show other people.

Finally comes the third draft. More of an edit than a rewrite, I start on the first sentence, and make it sing. This is polish, this is where you focus exclusively on the grammar, the sentence structure, do your words ALL truly mean what you want them to? You may have to move words, sentences, paragraphs, and sometimes (rarely) chapters around. But you’re story is done, you’re just trying to tell it in the best way possible.

This is it. This is how it’s done. This is how everybody does it. Every now and then there are rumors of someone who wrote a book in one draft (the latest was Gabriel Garcia Marquez on “100 Years of Solitude”), and they are always dispelled.

Truth be told, it is possible to get a mediocre book in one draft. But you’re robbing yourself of the brainstorming where greatness comes from. I would change Hemmingway’s quote from “All first drafts are s**t” to “All first drafts should be s**t”, because if they’re not, you’re doing something wrong, you’re not experimenting or exploring, and your work will be mediocre at best.

When I am teaching writing, I still hear all the time “I don’t use drafts. I don’t need them…” and I always reply the same way.

See, there is little difference between writing a story, and writing a song. You have a plot, you have characters, you have highs and lows, a bridge, denouement, and an ending. The medium is different, but the craft is the same. 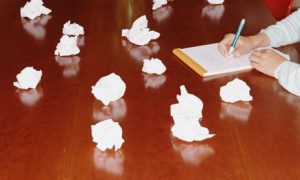 So when I think of some of the best writers, Melville, Hemmingway, Falkner, King, London, Twain, Dickens and more…. I also think of Bach, Beethoven, Williams, Chopan… They too, were writers, using most of the same rules.

And of all those and more, there is only one writer in the history of the craft known not to have used drafts…. His name was Wolfgang Amadeus Mozart.

Mozart (who, talent aside, practiced 10 hours every day) could hear a 4 hour symphony on one day, and write it out, note for note, a month later, with no errors (and backwards, if he was feeling particularly playful). This is tantamount to attending a 4 hour book reading, and reciting it word for word.

The truth was he did draft, but because he had total recall of music, he simply drafted in his head. He didn’t need to write down his drafts, he simply remembered every note of all of them.

So when I am told by a budding young writer “I don’t use drafts, I don’t need them,” I simply say this; “If you’re as good as Mozart, then you don’t need drafts. But if you’re only as good as Hemmingway, use drafts, and use them well”
Using the drafting process properly, you will not only come out with better work, it will actually take you less time. That is why all the professionals do it, and you should too.