Exactly one week from today is Columbus Day.

Many Italian Americans take great offense at charges of genocide and rape levied against Columbus. They consider him a symbol of their national pride and heritage. All of that would make sense, if Columbus had in fact been Italian. Nobody is quite sure where he was from, but there’s evidence to suggests that his real name was Salvador Fernandes Zarco, and that he was born in Portugal, in a town after which he would eventually name one of the islands he discovered… Cuba.

Whoever he was, there were no significant records of him before the 1470’s. Columbus took great pains to hide his true identity, and whatever his name was, he may have found the “New World,” but he did not discover America. 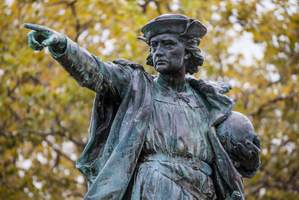 The first people to discover the Americas were of course, the Native Americans. Their descendants likely walked here from eastern Siberia, some 14,000 years ago on the land bridge of Beringia. As the Ice Age ended, the ocean level rose, giving us the world as we know it today. Beringia was submerged, the British Isles trimmed from the European mainland, and Borneo, Sumatra, and Java were cut off from the Asian mainland.

Inaccessible to Europe and Asia except by boat, America was “lost” until re-discovered Leifur Eiriksson, a Viking explorer (and the first European to find the continent). The Vikings settled a colony in Nova Scotia, L’Anse aux Medows, roughly 500 years before Columbus was even born. The settlement didn’t survive very long, and the Vikings couldn’t relocate it. Having apparently “misplaced” the continent of North America, they promptly forgot about it.

Columbus was next, and he never discovered the mainland. In an attempt to sail around the globe to Asia, he traversed the vast ocean and completely missed the continents of North and South America, landing on the only land between America and Spain… the Bahamas. The odds of that are astonishing. Missing the continents themselves for a few tiny islands was like looking for a haystack and coming up with a needle instead.

Believing he was in India, he named the islands the “Indies”, and made a total of four trips there. In his life, he never saw North America, and discovered South America only on his third trip in 1498, by which time North and South America had already been discovered and explored by another man… Amerigo Vespucci. Vespucci found the mainland on April 10, 1497, more than a year before Columbus did. Having correctly calculated the circumference of the earth, Vespucci also recognized the land for what it was, a new continent, and named it “America.”

Further, and contrary to popular belief, it was well understood at the time that the world was round. It had been figured out nearly 2,000 years prior by the Greek mathematician Eratosthenes, and was evidenced to all by the fact that when a ship sailed away, the mast was the last part of it to fade from view, indicating a curve. The only question was, how big was the earth? The land route to Asia was dangerous, and controlled by the Turks. A sea route would be safer and faster, if Asia were close enough. But boats could only go about 40-45 days without re-supplying, so they couldn’t explore further than about 20 days out (needing half their supplies to get back).

Columbus’ calculations put Asia about 24-28 days away, and he was literally willing to bet his life on it. He was given three ships and was charged with bringing back gold from Asia. In return he would get 10% of the profits, governorship over any new lands, and the title of Admiral.

30 days later, they had not found Asia, and the crew was understandably restless. Though there was a reward (10,000 maravedias a year for life) for the first person to spot land, they were also desperate for supplies. Three days later, a sailor spotted one of the Caribbean islands. This caused considerable jubilation, after which Columbus claimed that he had actually seen it the night before (though he failed to mention it), and took the reward.

Arriving in the Caribbean, Columbus named the land the “Indies”, and the natives he found “Indians”. “I showed them my sword,” he wrote in his journal, “they took it by the edge and cut themselves out of ignorance… With fifty men we could subjugate them all.”1

Many of the natives wore gold jewelry, suggesting to him that gold was plentiful. He enslaved what natives he could, and demanded they take him to the gold. He was led to Haiti and Cuba, but found little of interest. So he loaded his ships with native slaves and returned to Spain.

While the slaves had value, it was small compared to the gold that had been expected. He knew that he could not get a second trip without the promise of a considerable return on Spain’s investment. So he lied, claiming that most of the mountains and rivers he had seen contained vast quantities gold. He was given 17 ships for a second trip.

He was also given explicit instructions by the King and Queen of Spain to maintain friendly relations with the natives (in the hopes of later converting them to Christians). He was there for gold, spices, and silks, not for slaves.

His second trip to the Indies was as fruitless as the first. He ordered all natives over the age of 14 to collect a weekly quota of gold. Any person not meeting his quota would have his hands cut off. Knowing there wasn’t nearly enough gold to make the quotas, the Native Americans fled. Columbus had them hunted down and mutilated for their betrayal. So ferocious were the Spaniards that suicide by poison became preferable to many of the natives. 110,000 of them were slaughtered in just two years, wiping out the entire population on several islands.

Columbus then established a fort in Hispaniola and captured 1600 Arawk “Indians”. Most were kept there and used as slaves. Women and children were raped, and Columbus himself wrote in his journal of using slaves for sex and sword practice. He took 550 of the slaves back with him to Spain. Half of them died on the trip there. Spain, surprisingly, did not consider enslavement within the bounds of “friendly relations,” and freed the surviving slaves.

Even more surprisingly, he was given 6 ships for a third trip. The priest Bartolome de Las Casas was instructed to go with him and keep an eye on him. Bartolome would later publish “A short account of the destruction of the Indies” based on what he saw. He wrote that “from 1494 to 1508, over three million people had perished from war, slavery, and the mines.”

When Columbus arrived for the third time, he found his fort in near rebellion. While he was away it had become clear to them that the gold Columbus had described to get his second trip did not exist. Faced with mutiny, he began hanging his own men. Finally, he was arrested, stripped of his governorship, had his profit sharing deal with Spain revoked, and was sent home in shackles.

Columbus was insulted by suggestions he had found a “New World.” He died vehemently opposing the increasingly popular idea, believing instead that his calculations had been correct, that he had found Asia, and that Amerigo Vespucci’s “America” was simply the Asian mainland.

As the governor of the Indies, he was responsible for what many historians consider to be genocide. Bartolome’s figures are likely highly inaccurate- 500,000 being a more realistic number. Does this put Columbus in the same league as Hitler? No. But we are talking the same ball game. One is forced to wonder how many Native Americans would have died had Columbus had Hitler’s technology, had Spain not arrested Columbus, or had there been more people to kill.

Many Native Americans find the name “Indian” offensive. It was the name Columbus gave them. Columbus Day became a national holiday in 1971, though in some South American countries it is called the “Day of Indigenous Resistance” and is a day of mourning.

Nick — you’ve obviously taken great pains to get facts straight. One that may have slipped through the cracks is something I’ve given considerable thought to — while in various states of inebriation at the shore. This business about seeing the mast of a ship last, indicating the world is round. C’mon. Look at a ship on the horizon. Even with modern binoculars a full ship appears as a tiny speck. We’re expected to believe a mast, maybe three feet in diameter, is visible miles and miles beyond where we see the full ship? Theory says for every foot a… Read more »

Dean, always remember (unless you’ve grown too old to remember), the first rule of writing… ie. Never let facts get in the way of a good story… or your personal predilections…

We do not have one single Native American holiday. That is a disgrace and says a lot about this country

The facts of this are dubious. I’d like a source for what he says is in Columbus’ diary. Atrocities occurred, but I’ve never evidence directly implicated Columbus. There were several forts established and he could not control everyone’s actions.