Skip to content
Home > Current > What Can I Do, Right Now!

What Can I Do, Right Now!

People have been asking me to say something to make them feel better about all of this.

Well, I’ve been doing little more than talking for the last week (and I’ve no real intention of shutting up). And some of you have been kind enough to say I’ve helped, so thank you.

But frankly you’re not going to feel better till you do something concrete. And that’s a problem, because until Donny boy does something concrete we can measure, we’ve little to respond to. I’m lucky, I get to talk to you. Some of you are out in the streets, and that’s awesome (if you keep it peaceful). But there’s this terrible feeling like you need to do something, but what is there?

Well the time will be coming soon enough, and there will be mid-term elections, and Christ if you can’t muster what you need to get yourself to the polls, we’ll be in real trouble. But what can you do, today, that’s real, and specifically addresses your concerns over the Trump Presidency.

I have one suggestion. It’s what I’ve done.

I don’t like to talk about charitable donations. There’s no way to do it without sounding like you’re bragging, and donations are really a private thing. I’ve never spoken about who I donate to, why, or how much. But this is important.

Now I don’t donate locally. The boy scouts are fine, so is the PTO, the glee club, and so on, but I end up sick to my stomach when I donate to them; the feeling of having helped my local community turns to nausea when CNN pops up a picture of a 12-year-old boy who drowned trying to escape the war in Syria. Was a small donation to help the high-school band do a pep rally really the best use of my $20?

I’m not going to discuss who should donate or how much. I do it because it makes me feel good, it’s as simple as that (and I feel less good when I talk about it, so, this is… unique, for me). But I am going to talk about where I donate.

I donate to Children International, UNICEF, UNHCR, and Doctors Without Borders. These are organizations who put human life above all else, and don’t put religious or other arbitrary restrictions on who gets what help.

But I’ve also been a proud, card carrying member of the ACLU for about 15 years now (yes, we get cards).

The ACLU does one thing and one thing only, they defend the US Constitution. It ain’t always pretty, but they do it, and they do it well.

They don’t save lives, they don’t feed starving children, and they don’t send doctors to the worst, hell on earth places. But without them, all of those other things become much, much more difficult. And if you don’t think that an un-checked Trump administration isn’t capable of wrecking havoc on human life on a global scale, you haven’t been paying attention.

The ACLU published a letter to Trump last week, and I couldn’t be prouder. You can find it below. If this speaks to you, if you want to stand behind an organization with these values, and you want to do something now, today, to help, please consider a donation. I’m not ending my donations to those other charities, but my priorities have changed some, and I hope they do for you to. This will help you, it’ll help them, and it’ll help us all.

You can find them here. 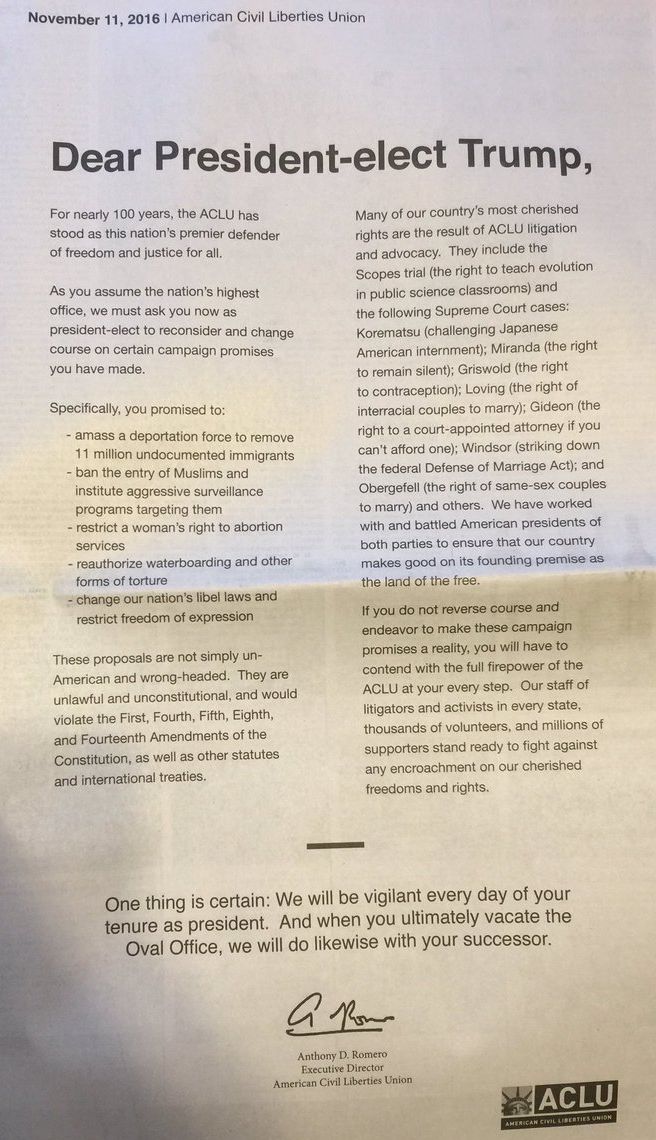