Skip to content
Home > Essay > And to the Republic

And to the Republic

I am a liberal Republican.

In our zeal to spread democracy around the world, people often forget that we ourselves do not live in a democracy. We live in republic.

A republic emphasizes the rule of law.

A democracy emphasizes the rule of the majority.

After the Civil War, “Radical” Republicans like Representative Thaddeus Stevens of Pennsylvania and Senator Charles Sumner of Massachusetts, gained control of congress and began passing legislation like the Civil Rights act (which, among other things, gave blacks the right to purchase property) and the 14th Amendment (which grants due process and equal protection to all citizens of the United States).

President Andrew Johnson, a Democrat, believed that this impeded on the freedom of a state to treat its citizens as it chose (in essence, the freedom of the white majority to enact laws against the black minority). He vetoed the Civil Rights Act. One hundred and twenty six republicans overrode his veto, and the act became law.

Interestingly, partisan rancor was alive and well then too. In retaliation for the President’s handling of reconstruction, house republicans passed a law (the Tenure of Office Act) which only applied to President Johnson, and which he could not reasonably follow. When he broke it, he was immediately impeached, ultimately holding on to the presidency by a single vote.

As the pendulum swung, “Radical” republicans gave up their liberal thinking and began down a path of restricting freedom in the name of morality (and, more recently, safety) and democrats assumed the title of liberal. 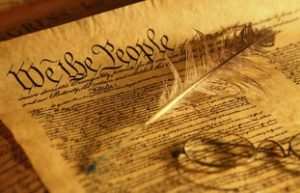 If you still doubt we are, and were intended to be, a republic, I suggest you recite the pledge of allegiance.

The two greatest threats to a republic are money and religion. Anticipating the problem of religion (where the violation of religious beliefs becomes a crime against the state), the founding fathers created a strict separation of church and government. While money (tantamount to bribes and buying elections by way of PAC’s) is the greater threat, religion is far more fascinating.

A recent example of where democrats have picked up the republican torch is the issue of gay marriage. Where once Republicans argued that the encouraging of slavery by the bible (Leviticus 25:44-45, among others) didn’t make slavery right, they now argue that the condemnation of homosexuality in the bible makes homosexuality wrong.

The church has every right to make those types of determinations. But it can impose those standards only on the followers of that religion.

Legally recognized marriage in this country is a purely secular institution. One does not need a religious ceremony to get married. When there is a ceremony, ceremonies of all faiths are recognized equally. The legal responsibilities of the marriage, including child custody, income and debt, privileged communication, healthcare, and taxes are all secular.

In a republic, the fact that 80% of the people want to prohibit gay marriage is not sufficient reason to do it. John Stewart Mill proposed that something should be prohibited only if it harms others. Today “Harm” has been watered down to include anything we see or hear which offends the sensibilities.

The compromise of Civil Unions, with all the privileges of marriage under a different name, relegates people (even if in title only) to second class status. It is the principle of “Separate but Equal”, a concept which does not work.

World history is rife with powerful groups using their status as a majority to strip the minorities of rights and privileges enjoyed by others. A democracy is no guarantee of freedom. Hitler was democratically elected. What makes our system the best is that it is a republic.

The fact that we were founded as a republic was no accident. In a world filled with racism, nuanced international policies, nuclear proliferation, and global economics, 80% of the country’s population isn’t expected to make informed decisions. Rather than having the public vote on policy, we elect officials to do it for us, officials whose job it is to protect all Americans, not just the ones who voted for them.